Nathan Yeoman
Age: 25
From: San Clemente, California
Surfs: Goofy
In 2005, if Nate had made one more heat in the Cold Water Classic, he would’ve bumped Asher Nolan down to second and taken the Macy’s Trifecta Points Title himself. Still smarting from that loss, Yeoman’s 2006 campaign ended victoriously, with a win over Nathaniel Curran in the Point’s Race during his last wave of the contest in Santa Cruz. With $10,000 in the bank from his win last year, Yeoman’s has entered 2007 in search of a repeat, clenching the 2007 Oakley Newport Beach Pro title and attempting to carry that energy to the last stop of the Macy’s California Trifecta Surf Series at Steamer Lane, Santa Cruz.

Curran Nathaniel Curran
Age: 22
From: Oxnard, California
Surfs: Regular
For the past two years, Nathaniel Curran has been in the running for the Macy’s California Trifecta Surf Series Points Title. Last year, he finished behind Points winner Nate Yeomans—but just barely, placing second at the Oakley Newport Beach Pro and the O’Neill Cold Water Classic. Coming into 2007, the explosive youth from Oxnard has proved to be a Trifecta contender yet again, making it to the semi-finals of the Oakley Newport Beach Pro, which put him at number nine on the 2007 WQS Trifecta ratings. Look for Nathaniel to turn heads at the third and last stop of the Macy’s CA Trifecta Surf Series, the O’Neill Cold Water Classic.

Roy Powers Roy Powers
Age: 26
From: Hanelei, Kauai
Surfs: Regular
Roy’s maiden year on the 2006 WCT did not go as planned, but there were successes that occurred and lesson learned that will undoubtedly make him a better competitor. He beat Andy Irons, Bruce Irons, Taylor Knox, and a host of top WCT surfers during his brief year on the World tour. He also placed 5th in the Quiksilver Lacanau WCT event. At the Pipe Masters, he pulled into a huge 10′ cavernous Backdoor beast that had the crowd on their feet. He finished that event in ninth. So far, in 2007, Powers is sitting in a good position to qualify again for the WCT, hovering in the top 20 range on the WQS. As the season winds down, look for Powers to be a strong contender in Santa Cruz.

Pat Gudauskas Pat Gudauskas
Age: 21
Resides: San Clemente, CA
Surfs: Regular
Pat Gudauskas, twin brother of Dane, is the lone regular footer in the Gudauskas family. His free surfing has caught the attention of many, but Gudauskas is also an excellent competitive surfer as well. He had a stellar 2006 WQS run, finishing the year at #22 over all and chalking up two ASP WQS 4 Star wins in Europe along the way. He has proven himself to be a serious contender for WCT qualification and hopes to make the push sooner rather than later. During 2007, Gudauskas has surfed every WQS event of consequence and is attempting to make a serious push at qualifying for the WCT in 2008. Pat will be sure to throw down at Steamer Lane and prove to be a serious contender at the third stop of the Macy’s California Trifecta Surf Series.

Kieran Horn Kieran Horn
Age: 33
From: Santa Cruz
Surfs: Regular
As team manager for the Men’s O’Neill Surf Team, and as a seasoned competitor, Kieran Horn is both a mentor and a proven success story from the Santa Cruz area. Ranked 23rd on the 2007 WQS Trifecta Ratings, Horn needs to put together some impressive heats to clench the coveted title and points. But with an intimate knowledge of the Lane, and as a former Cold Water champion—he won the event in 2003—he undoubtedly knows what it takes to make it to the top, and is sure to be a tough competitor when the Trifecta hoard descends on his home town.

Rat boy Jason “Ratboy” Collins
Age: 33
Resides: Santa Cruz
Surfs: Regular
Ratboy is a complete surfer. He can throw down a carve that would make your mamma cry and pull off tailslides snaps that have people on the cliff at Steamers looking for a chiropractor. His surfing is so precise and technical that it’s just a matter of time where Ratboy will have his second coming. His surfing is perhaps more sharp now than ever because he is more experienced and is increasingly calculated. Ratty is presently living in Santa Cruz and not slowing down. He made the semi finals at the Coldwater Classic 05 in epic surf, and he was the experienced anchor and standout performer for the Santa Cruz Stormriders in the NSL’s The Game. Jason “Ratboy” Collins still goes to sleep at night wondering what kind of trick he’ll do next, and is sure to be a crowd favorite this year during the Cold Water Classic.

Josh Mulcoy Josh Mulcoy
Age: 37
From: Santa Cruz
Surfs: Regular
A local standout and favorite from last year’s competition, Mulcoy finished 7th overall in 06 after advancing all the way from the Cold Water Classic trials. Having grown up under the wing of his father “Harbor Bill”, who is an underground Santa Cruz legend, Josh is ingrained in a town that prides itself on producing generations of talent. Always a standout at the Cold Water Classic and at Steamer Lane, expect to see Mulcoy’s approach take him far at the Cold Water yet again in 2007.

Josh Loya Josh Loya
Age: 37
From: Santa Cruz
Surfs: Regular
Coming off of an injury-plagued year, Loya is pumped about this year’s contest and ready to turn heads and show potential sponsors what they’re missing on their team. Loya has been at the forefront of high performance surfing in Santa Cruz, whether it’s ripping a head high day at the Lane or the legendary day during the El Nino winter when he caught a wave all the way from outside Swift St. through to Mitchell’s Cove. What sets him apart from the rest of the field is his style. While many Mav’s surfers tend to squat stiff-legged and flail their arms in awkward positions as they struggle for balance during a late drop, nine times out of 10, Loya will gracefully ease into his drop like butter. Proving that he is just as talented in the small stuff, Loya also made it to the finals of last year’s Cold Water Classic, finishing in 4th after advancing from CWC trials. 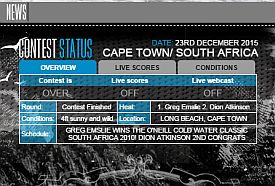 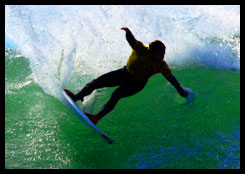 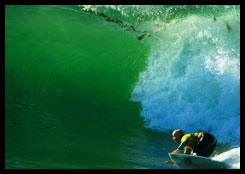 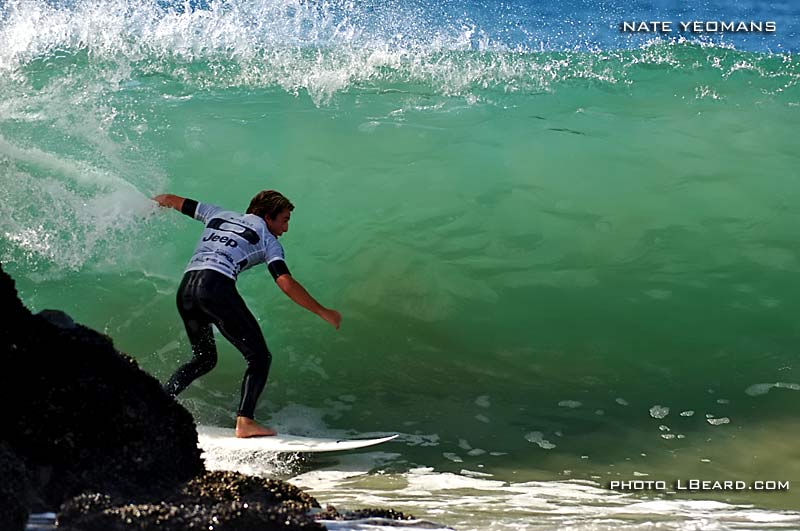 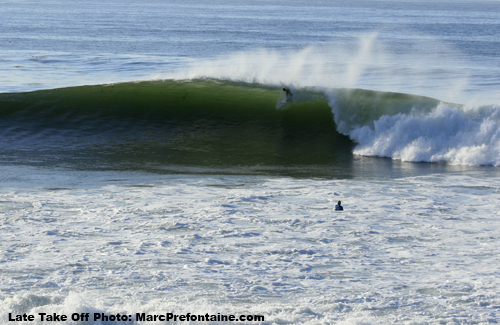